latest entries today
Comments
4
Started on
2022-04-31
Started by
bern broeren
Report
Report Title
the most active users in this title: 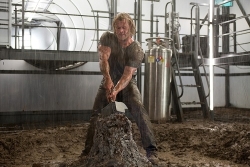 In the iconic scene of Avengers: Age of Ultron, which I am sure will be very familiar to you, it is mentioned that Thor's hammer Mjölnir can only be lifted by the worthy and the person who can do it will have Thor's supreme power. Those who follow Thor from movies or comics will know very well that Mjölnir is incredibly heavy and no one but Thor can lift it, which sometimes causes unforeseen problems. In the movie scene, Thor tells other members of his crew to try to lift Mjölnir, which is standing on a coffee table in Tony Stark's attic. Predictably, no one can even move it, except for Captain America, who manages to move it very little. Thor then picks up the hammer and randomly throws it into the air.


Although Thor's hammer and everything about it is unfortunately completely fictional, the scientific world has not neglected to come up with a hypothesis that could explain the hammer's incredible weight.

Gravitons!
While it sounds like the name of a fictional character (there's actually a villain in the Marvel universe called Graviton!), gravitons are real… at least in theoretical physics. The graviton is the fundamental particle that mediates the gravitational force in quantum field theory; in other words, it carries the force of gravity. To put it more precisely, when you throw something into the air and the object bounces back due to gravity, the theory is that gravitons are pulling the object down.

Apart from the gravitational force, there are three fundamental forces in nature. All of these forces have their own intermediate elementary particles; light (electromagnetism) travels through photons, the weak interaction is mediated by W and Z bosons, and the fundamental particles that carry the strong nuclear force are called gluons. All these particles “carry” the forces we observe at the macro level. Since the gravitational force is also one of nature's primary forces, it has been theorized that gravitons must also be elementary particles.

However, it is one thing to theorize something and another to prove its existence through experiments. Today, the presence of gravitons is almost impossible to detect because we do not have a detector physically suitable for this. Also, since the gravitational force is the weakest of all natural forces, it seems physically impossible to detect gravitons due to the extremely small cross-section of their interaction with matter.

Since there is a gravitational force between any two particles, regardless of their position relative to each other, it is assumed that the particles that carry this force between two bodies, namely gravitons, must be essentially massless. They must also carry a spin of 2, because the source of gravity is the stress-energy tensor, which is a quadratic tensor. These attributes indicate that if a massless particle with spin 2 is detected, it must be a graviton.

What do gravitons have to do with Thor's hammer?

Gravitational force is defined as the force that gives weight to any object. (Let's not forget that the 'weight' of an object is different from its 'mass', which is independent of all external forces.)

Since the Moon's gravity is one-sixth that of the Earth, if you weigh 60 kilograms here, you cannot weigh more than 10 kilograms (60/6) on the lunar surface. In short, the higher the gravitational force, i.e. the higher the number of gravitons, the heavier an object. Which means the mighty Mjölnir must be dealing with gravitons somehow!

Norse mythology and Marvel Comics tell us that Mjölnir is composed of "uru metal", forged ages ago by the blacksmith Etri at the heart of a dying star. The hammer reads, “Whoever holds this hammer, if worthy, will have the power of Thor.” Essentially, this means that Mjölnir carries some sort of magic on himself, making it available only to those he deems "worthy". Therefore, the ability to "play" with gravitons must lie in the hammer, and indeed in the metal itself.

In the movie, the Norse gods are described to us as a race of alien beings whose abilities are not unlike magic, as their abilities are incredibly advanced compared to the twenty-first century world. That's why uru may seem magical as it belongs to a planet far more technologically advanced than our own. For now, let's assume that uru is 'magical' due to its far superior origins.

James Kakalios, professor of Physics at the University of Minnesota and author of The Physics of Superheroes, proposed a very interesting hypothesis about Mjölnir's incredible weight in an article for Wired ( www.wired.com/2014/11/can-hulk-lift-thors-hammer/ ). The professor thinks that since the hammer is made of a foreign and possibly scientifically advanced metal (uru) under appropriate external stimuli, it should be able to control the emission of gravitons!

So, when someone (let's say the Hulk) tries to remove Mjölnir, it instantly calculates its owner's 'value' using some sophisticated algorithm and decides whether it is worthy of using the hammer. If one finds it valuable, the person effortlessly lifts it (just as Thor does) but otherwise, the hammer increases the graviton emission to counteract the upward force exerted on it. Therefore, the more Hulk tries to lift the hammer, the greater the number of gravitons that will be released and the heavier the hammer.
bern broeren

Likewise, when Tony Stark tries to lift Mjölnir using his Iron Man glove, he exerts an upward force greater than Mjölnir's weight, but still the hammer remains motionless. In this scene as well, it can be concluded that a unique property of uru metal is that it can emit large quantities of gravitons under appropriate stimuli.
bern broeren

In the movie, gravitons are assumed to transmit the force of gravity, and if an object emits too many gravitons, this would be equivalent to increasing its mass. Thus, when a "worthless" person exerts an upward force, the heavy metal increases the weight of the hammer to completely cancel this lift, and the hammer remains motionless. When Tony and Rhodey simultaneously apply a greater upward force, the gravitons' emission rate increases to neutralize their efforts again. The increased weight does not damage the table, since only enough gravitons are emitted to hold the hammer steady, that is, to balance all the upward forces. When the lift force is stopped, the excessive graviton emission also stops.
bern broeren